Last week, we discussed the importance of heavy buyers - in particular, households with children - to driving more sales growth in the food and beverage categories we surveyed in our TABS Group 2015 Food and Beverage Consumables study*. In today's post, we'll look at a trend we've seen in a number of CPG categories, declining consumer participation in trade deals tactics.

The survey definitions for consumer trade deal tactics include the following: 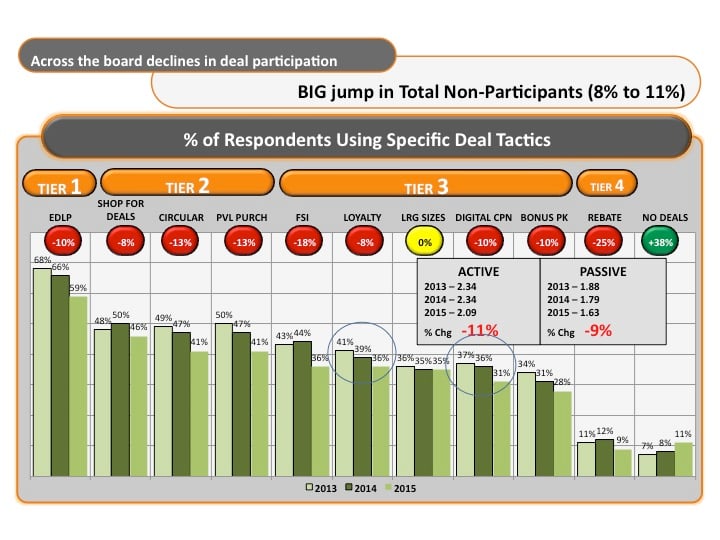 In the TABS Group Webinar “The False Hope of Loyalty Cards,” it was noted that the effectiveness of trade promotions had dropped significantly in recent years as retailers placed more emphasis on promotional vehicles with less popularity and lower effectiveness, such as loyalty cards and online coupons.  It was shown that the incremental sales at many retailers using these vehicles had dropped dramatically.  The information that shows a surge in discouraged deal shoppers, therefore, is not surprising given the empirical observations.

In fact, this study also reinforces prior TABS Group research that found a high correlation between purchasing level and deal level. In fact, the research shows conclusively that it is more than correlation, but is actually causation, an important distinction.  The survey found that just over three percent of the total population of shoppers are heavy buyers, but light deal users.  Light deal users account for less than 25 percent of heavy buyers only.  Conversely, 10 percent of the universe of shoppers are both heavy buyers and heavy users of deals.  Said another way, a heavy buyer of consumables is three times more likely to be a heavy user of deals (six tactics or more) than a light user of deals (zero-two tactics).  Even worse, if a shopper is a light user of deals, he or she is six times more likely to be a light buyer than a heavy buyer (18.6 percent versus 3.1 percent of all shoppers). 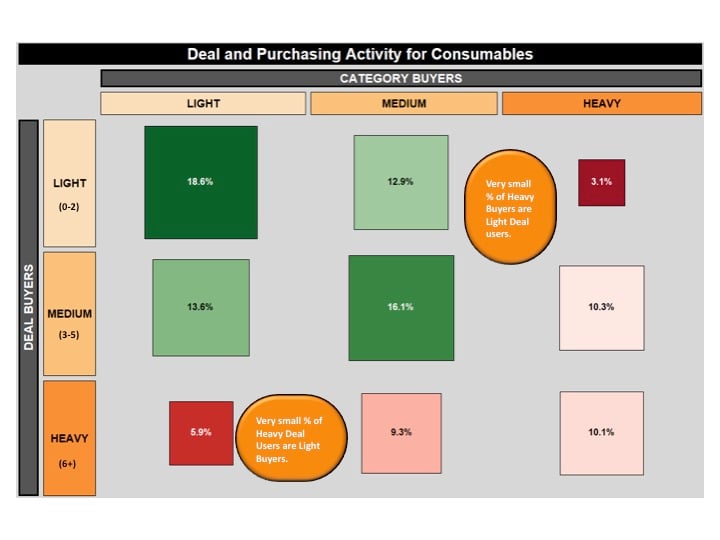 In our next blog post, we'll discuss channel/outlet shopping trends garnered from the 2015 food and beverage study, including what's happening in the Grocery (Food) channel and how Online sales measure up. Download a detailed report on the findings to learn more.