The decrease in sales among this age group is likely a result of a number of lifestyle changes: young women are getting married later and living with their parents longer, reducing their need to shop for groceries independently or rely on pre-packaged foods. While living at home typically results in more disposable income, young women are spending their extra cash on technology, not consumables. According to eDigital Research, the Male/Female split in smartphone owners went from 63/37 in 2010 to 42/58 in 2013, a 21 point swing! According to numerous press reports, young women are also becoming more health-conscious, and purchasing less packaged foodl. In fact, our study showed that “junk food” items saw the sharpest declines in sales among millennial women: candy (30 percent decrease), ice cream (22 percent decrease), and carbonated beverages (18 percent decrease)

Since it’s safe to say the dismal growth of the consumables market can be attributed, in large part, to the decline in sales among millennial women, should CPG snack food brands be revolutionizing their marketing and sales strategies to win those purchasers back? Probably not. Our study confirmed that large families and women in the 35-54 continue to be the lifeblood of the CPG industry. Purchases of consumables by households with children and by women ages 35 to 44 remained steady from 2013 to 2014, while purchases by women ages 45 to 54 increased (probably due to having to feed their slackard millennial kids). Consumables companies should embrace these high-priority segments and send some more love their way, no different than what they were doing in the days of Ozzie and Harriet and Milton Berle’s Texaco Star Theatre.

How to Reach the Core Demographic?

What’s the best way to engage these core demographics (and consumers in general)? Compelling deals, sales, and promotions. Our study found that women ages 35 to 64 and large families are, predictably, the heaviest deal users. About 25 percent of female respondents in this age group indicated that they regularly use more than 7 deal tactics, and 28 percent of families with more than five family remembers reported the same. Furthermore, there’s a clear cause-and-effect relationship between higher deal activity (i.e. searching for and taking advantage of promotions) and actual purchases. In other words, the heaviest deal users make the most purchases—by a long shot. In fact, when we examine deal users at either end of the spectrum, we see that the heavy deal users purchase 70 percent more than the lightest deal users and shop at nearly twice as many outlets. Instead of focusing on the millennial women shoppers that they’re losing, consumables companies would be wise to focus on the deal-hungry women and large families.

Unfortunately, industry analysts continue to see many CPG companies ignoring the importance of well-structured deals. In Q2 of 2013, both the US Economic Bureau and Nielsen documented a steep decline in CPG growth rates (what we refer to as the “Desert of Despair” in our most recent webinar). This dramatic drop-off is likely the result, as we’ve discussed in previous webinars, of less compelling deals. The longstanding belief that shoppers will buy at full price after being “trained” to patronize an outlet through promotions is simply a myth. One particularly interesting data point—related to a group we call “discouraged deal users”— confirms this: from 2013 to 2014, the percentage of deal users in the light deal users category actually increased, but their purchases decreased by 5 percent, indicating that shoppers using less deals end up buying less merchandise,not more.

We also see too many retailers attempting to replace promotions and deals with EDLP (everyday low price), which just isn’t working, evident in Walmart’s steady decline in popularity among active deal seekers—from 24 percent of purchase share in 2012 to 18 percent in 2014. While EDLP is still an important strategy (66 percent of our respondents reported shopping for EDLP as a deal tactic), it must be complemented with regular discounting to encourage increased purchasing among the heavy deal seekers, who employ a variety of tactics to find the best deal.

Our recommendations? Focus on the core demographic of women over 35 and large families, and embrace the fact that deals are a fundamental element of sales and marketing. Prioritize a promotional strategy that includes both active deals (i.e. the consumer has to complete a task like cut a coupon) and passive deals (i.e. the deal is available automatically at point of sale). Finally, for the best ROI, augment EDLP with aggressive promotional discounting.

Below you’ll find an infographic demonstrating the decline in millennial women’s purchases and its effect on the CPG industry. In the coming weeks, we’ll be publishing a series of infographics and blog posts with additional conclusions and recommendations from the 2014 Consumer Value of Consumables study. 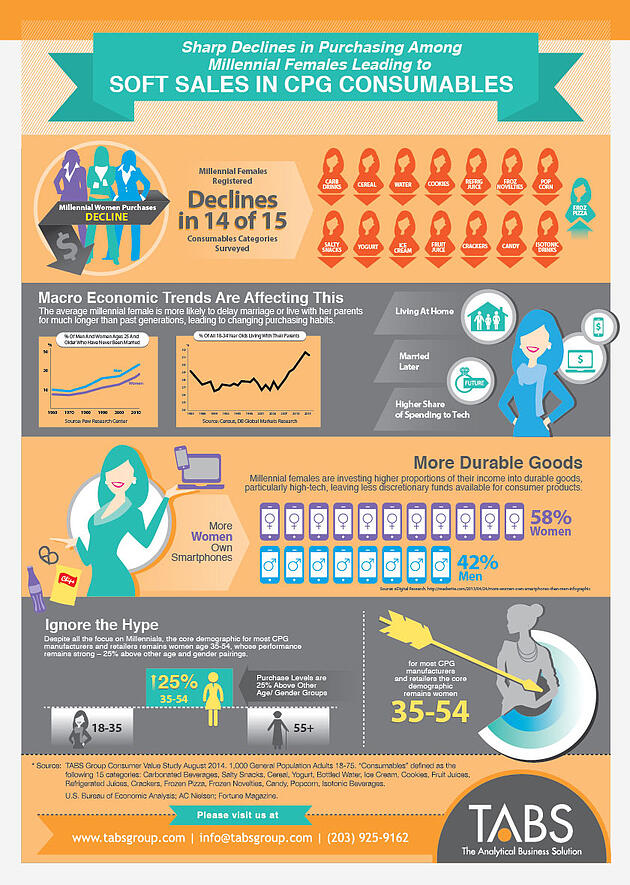