Ship to Consumption – To Catch a Diverter

When attending various industry summits, I hear a lot of presentations about trade promotion analysis. Some speakers really know their stuff; most don’t. For example, whenever I hear the phrase, “You can analyze trade promotion effectiveness using shipment data,” I know that I can freely disregard whatever comes after. You can’t. Not accurately, anyway, and not without wasting a lot of time to finally find out you are measuring something else: the degree to which your supply chain is a leaky bucket of diversion.

Except for rare cases like direct-to-store delivery (DSD), like alcohol and snacks, the shipment and retail sales trends of any given account usually diverge dramatically. If there were no diversion (defined as product shipped to a customer and then resold – or diverted – to another retail customer) then it would be unsustainable to continually ship more than is being sold at retail. Retailers only have a certain tolerance for allowing your inventory to become theirs.

Here’s an example of a common CPG scenario on the following chart, which encompasses two years of data. The shaded area includes the first 52 week period, and the white area represents the second 52 weeks. 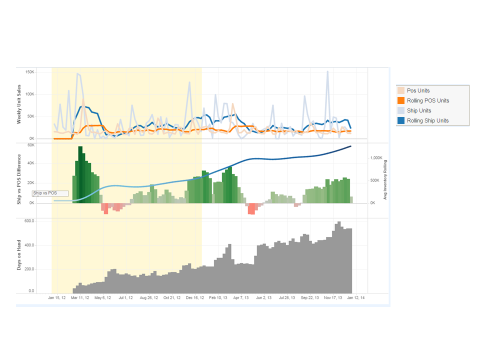 Let’s break this chart down into its three respective parts.

The upper part of the chart details our sales, both shipment and retail sales (i.e. consumption). The light orange and blue lines represent the weekly consumptions and shipments, respectively the darker lines are those same units rolling on an 8-week basis.

The second portion represents retail inventory, in other words, the difference between shipped units and point of sale units moved. The green lines are increases, while the red represents decreases.

So, when there are more shipments than retail sales of said shipments, you would see those bars going green. The upwardly trending line in blue constitutes the total inventory level.

The bottom portion are the retail inventory days of supply, based inventory compared to average weekly consumption over the prior 8 weeks.

I will tell you that just bringing this information together is extremely difficult, and most CPG companies can’t and don’t do it. This type of analysis requires the work of a true expert in data harmonization.

The easiest and most accurate way by far of measure retail sales is in consumer units. Those who understand and apply this truly live the oft-touted ethos of being “consumer-centric.”

Note that this is far more the exception than the rule. Too few companies measure their sales according to the way that consumers buy the product, consumer units

Sadly, the far more common practice for these operations-focused enterprises is to measure according to the same units that they ship: by the case, by the pallet, etc. Alternatively enterprises are “marketing-driven” and measure unit sales in terms of equivalent volume: ounces, bars, eaches, etc. But this isn’t how consumers buy products is it?

The problem with this approach is that you expend far more time and effort trying to figure out how to link POS movement back to their shipments. Again, this generally proves to be fruitless due to a variety of reasons too numerous and technical to detail here.

Getting back to the example, the middle portion of the chart makes the case for diversion very clear. If there were no diversion, the accumulation of inventory here would be completely unsustainable. It shows that we’re shipping way more than we’re selling at retail.

You can see it with those lines in the upper portion of the chart as well. The massive spikes in unit shipments in no way corresponds with the much smaller waves of retail sales.

In short, something’s off.

The only logical way this happens is if sales are being diverted to other retailers. This is typically the fault of the manufacturer. The retailers aren’t to blame – they’re only reacting to the opportunities that the manufacturers are providing in terms of deal levels and deal timing.

But none of those manufacturers are asking questions when they’re successfully locking in those large orders. They’re hitting their bonus quotas and giddily high-fiving each other. Life is good.

And then the well runs suddenly dry. 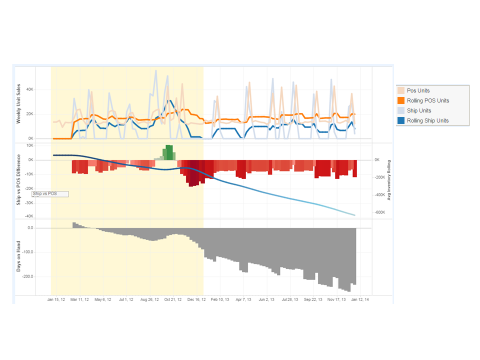 Here’s an example of the flip side of the equation. Here’s a company most likely bringing in that diverted product that someone is looking to jettison because they have a surplus. We see these pretty solid promotional spikes at retailer, preceded by an equally heavy promotional order a week or two prior.

However, looking at the darker blue line, we can see that if the vendor isn’t actively promoting, sales are completely flat. The retailer isn’t buying anything.

This too really has only one logical explanation: the retailer, in an effort to constantly get the best margins they can, are getting product off the diverter wire from other retailers. We can see here below the levels of vendor-supplied inventory are falling pretty consistently over time.

One might wonder why it wouldn’t occur to these vendors to ask themselves why there aren’t any reorders after a particularly strong, successful promotion. But perhaps that’s a topic for another time. 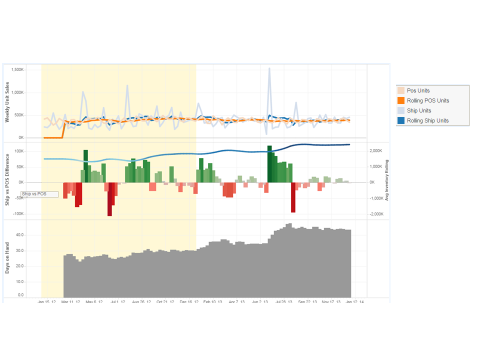 Note that even the so-called Best in Class retailers aren’t immune to this phenomenon. Here’s an example from a big box, EDLP retailer. No major promotional spikes, and shipments are reasonably consistent with consumption. So far, so good. At least for the first year and a half.

Then, out of the blue, we see this massive shipment spike. But, this is NOT followed by any promotional activity at retail. Then, a bit further down the path, there’s another spike in shipments. So again, the vendor’s popping champagne because they’re hitting their numbers for a little while.

But all that product has to go somewhere. If it isn’t going into consumers’ homes, then the only other probable outcome consists of it getting fed into the diverter network, and it eventually finds its way onto another retailer’s shelf.

It therefore won’t be long before the vendor starts scratching its collective head wondering why shipments have suddenly fallen through the floor.

However, if the vendor makes one fundamental shift, things will begin to make a lot more sense, and their sales patterns will be far more predictable.

As a savvy vendor, you need to get a handle on diversion. Align your shipments to consumption, and stop relying on shipment data to plan or forecast your trade promotions.

The best thing you can do is use retail sales data for your trade promotion analytics and assume a certain parity in shipment to consumption over time. At the same time your organization can plug the leaks in your supply chain by taking a closer look at how you structure your deals at retail.