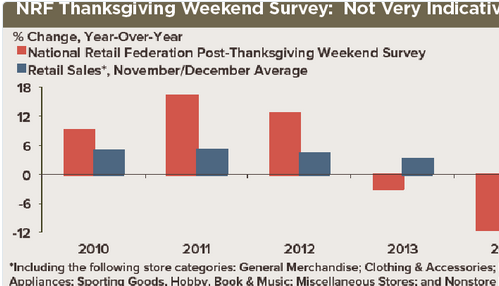 With all of the increased activity behind Thanksgiving and Black Friday sales, it was quite a shock when the National Retail Federation (NRF) released their annual report for the four day period starting on Thanksgiving Thursday and ending the following Sunday. After all we were seeing a period of more retail hours, more retailer promotions and more aggressive discounts, yet the NRF estimate was that sales fell a dramatic 11%. The decline was attributable to a decline in shopper count (-5%) and spending per shopper (-6%).

This Black Friday weekend was built up to be particularly important to break the pattern of sluggish consumer spending, and was even believed to be "make or break" for some of the weaker retailers such as Sears Holdings, JC Penney and Radio Shack. The 11% decline, then, was quite a slap to all of those in the industry and the media that had invested so much into this season.

While there were a few in the media that took some time to corroborate these dour results most of them took these results and ran with them. Between the press release on Sunday afternoon and the opening NYSE bell on Monday morning, there were already plenty of articles on the failure of promotion to revitalize the consumer spending, the likelihood of profit reductions due to the extended hours and deeper promotions, and the general insanity of all of these promotions, in general.

We now see a counterinsurgency of analysts - me being one of them - that are challenging this forecast and trying to bring some reality back into the picture. After all, there were real consequences to the NRF estimate. Virtually every major publicly traded retailer, both online and bricks & mortar, saw significant drops in their share price. It is also likely that there were several board rooms buzzing about what actions were needed to address these weaknesses in the market.

For over a decade the NRF has issued a survey among over 4,000 respondents 18+ asking about their shopping behavior on Thursday and Friday and their expected behavior on Saturday and Sunday. They are asked whether they shopped, where they shopped, and how much they spent. These results are then aggregated, summarized, analyzed and released in a very tight window; 48 hours is hardly enough time to carefully vet such an extensive and high profile consumer survey. Flaws and shortcuts are inevitable. Here, then, is a list of some of the larger flaws in the NRF estimates derived from this survey:

So in summary, if this study is going to continue to have such a significant influence on the business landscape, major steps will need to be taken to clean up the research. A few suggestions: 1) take an extra day on releasing the results to conduct necessary validation work, 2) balance the sample to the US population, 3) report only traffic and penetration, omit any information about transaction amounts, 4) release additional data to facilitate deeper validation and review, 5) include Age 10-17 in the research to determine if they are a meaningful source of sales and 6) provide the necessary qualifiers and caveats to the research instead of treating as hard and fast truth.