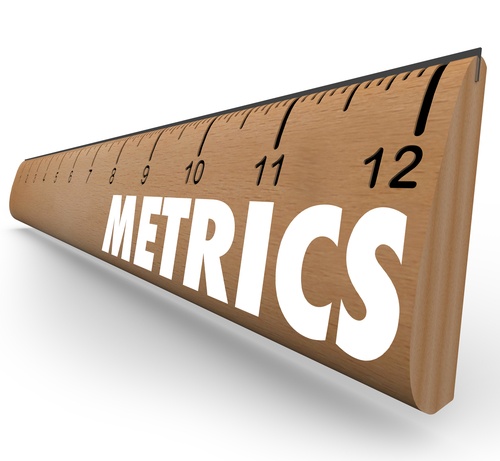 In this blog series, we’ll be exploring a number of incredibly insightful new business metrics. Most analysts don’t use them; many have never heard of them. These analysts are still doing the same kind of data analysis they were doing 20 years ago, very much to their detriment. Over the past three years, the top 15 CPG companies, many of whom continue to use these outdated practices, actually underperformed compared to the industry average. Less than 10% of these companies exceeded the (rather modest) industry growth of 2%.

There has since been incredible development in the way of new analytical tools and innovations. The beauty of these new metrics is that many of them can be found in the data you already have. We just mentioned that most analysts haven’t discovered these yet. As a happy consequence, neither have many of your competitors. Most figure that they’ve already wrung all useful information from their data, and have since moved on to other initiatives such as loyalty card programs.

The first few posts of this series will focus exclusively on syndicated data, in other words, the material you’re already getting from Nielsen, SPINS, IRI, etc. In our research, we discovered that distribution is by far the single most important metric when looking at syndicated data. It accounts for more than 50% of variation in market share (*).

The knowledge we have attained has since been independently validated through academic research. Yet suprisingly, it receives little attention. We have found four metrics that best aid companies in figuring out their distribution, and in this initial post, we’ll show you the first two.

The first is the Equivalized SKU, which is the one number that essentially represents your level of distribution. It is perhaps more easily understood as the weighted average SKU per store. These are your total distribution points (TDP), divided by 100. TDPs are the sum of all ACV values for items (UPCs) within a group.

Note that this measure is not average items per store, which is commonly, and usually incorrectly, used in the industry. It measures across all stores, just like you measure your market share.

While both measures deliver analytically identical relative results, the equivalized SKU is a much more intuitive metric than TDP. It is the difference between saying "my brand has 4.2 SKUs in every store" vs. "my brand has 420 TDPs." To demonstrate, let’s look at the following totals for Brand A: 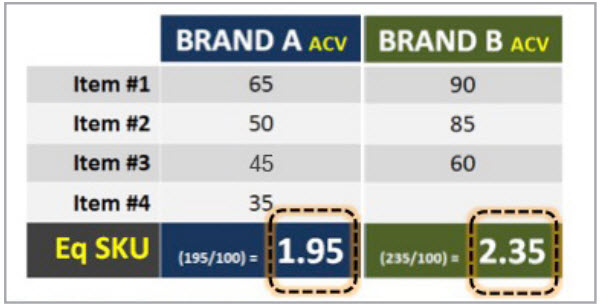 We have four items, without significant depth on any of them. They each range from 35% to 65% distribution. The TDP adds up to 195. Dividing by 100, we end up with a 1.95 equivalized SKU. This means that Brand A has almost two items in every store. Now look at Brand B. Even though it has fewer items, the significantly higher distribution percentages signify 2.35 items in every store.

This metric is the cornerstone of distribution-based analytics. It will later figure into innovation, sales decomposition and promotion metrics.

The first measure derived from Equivalized SKU is called Sales Productivity. This metric is calculated by taking sales share and dividing it by the equivalized SKU share. Why is this important? Say you have a brand share of 25%, making you the number one brand in the market. This may seem like really good news, until share of SKU metric reveals that you have 40% of the SKUs on the shelf. Paying attention to sales productivity can help bring you back into equilibrium.

It’s a much more reliable metric than the $/MM ACV precisely because it adjusts for differences in distribution. The latter is essentially worthless in cases where, for example, one brand has three items, and another brand has 100. It's also worth noting that dollars per million ACV is a hard metric from which to derive any tangible conclusions. Sales productivity, however, has intuitive meaning that can actually help with forecasting.

Take a look at the following table:

For each brand, looking at the productivity tells a story that you can not derive from the ACV weighted SKUs. Starbucks, for example, enjoys a high market share, but its productivity is actually below average, and its productivity is driven by a high SKU count. This would indicate a need for improved velocity of existing Starbucks items rather than looking into incremental distribution.

By contrast, Green Mountain and Dunkin Donuts are highly productive. Both have a smaller share due to limited distribution. In these cases, it would make a lot more sense to seek out more distribution because their average items outperfrom the category average by over 50%.

If you look at Peets, you can see a brand with a strong growth of 47% vs. last year, but brand productivity indices of 69% and 50% are still very weak. This leads us to think that brand growth may be a function of big gains in distribution rather than gains in consumer preference or item sales velocity.

This could be figured out by using the Velocity Change metric, which we'll discuss with Organic Growth measures in our next post.