In our last post, we concluded our discussion of distribution-based metrics. In this post, we’ll continue to make use of the syndicated data you already have, but this time, we’ll focus on the innovation of new products and the promotion of existing ones.

One persistent refrain from companies looking to generate growth is, “We need more innovation and new products!”

But how do you measure innovation and whether your company has done well at It historically? Can you tell which brands, vendors and categories are the most innovative?

Yes, you can. There are, in fact, three distinct elements for measuring positive innovation.

The first measure is Quantity. In other words, do you have enough new products to make a tangible difference?

The second measure is Quality. This serves to answer the question of whether the new items sell as well or better as the items they replaced. (Lamentably, the answer is almost invariably no.)

The third measure is Uniqueness. Is the new product sufficiently different enough from the items currently on the shelf to generate incremental sales?

In order to measure newer items against the old, we must first determine which products truly qualify as “newer.” We use the following criteria: A UPC qualifies as new when it’s had at least 5% ACV for less than a year. It’s best analyzed in 13-week increments. The longer the view, the more likely it is that the product is going to show weak sales due to insufficient weeks on the shelf over a period.

Promo packs are typically designated as new. But very often, such packs are not sufficiently different from what’s on the shelf to produce incremental sales. There are often disagreements whether this is fair or accurate, and our answer is absolutely yes.

In our TABS Insight™ product, we generate an Innovation Index. In this case, we’re looking at historical sales of ice cream manufacturers. Let’s see which were the most and least innovative.

The first column you see is Manufacturer Size. Larger manufacturers weren’t necessarily more innovative, but they do have the ability to make a more meaningful difference in the category trends. The second column is Quantity – what percentage of their items qualified as “New?” At Unilever, we can see that a full 25% of their items were new.

The next three columns represent Quality in terms of dollars per SKU, units per SKU and a combined measure (the first two measures are multiplied to arrive at a so-called power index). The productivity measures are the new items compared to the Existing items within the same Manufacturer. As we mentioned previously, the newer items from most manufacturers are not all that productive, as demonstrated by all the red and orange in the column representing the combined measure. The exception is Unilever, where the Power Index of the New Items is actually 20% better than the Existing items.

Third, we see Uniqueness, which we compute by taking the total growth of the business divided by the new dollars. In other words, what percentage of new item dollars translated into vendor sales growth?

Unilever’s next closest competitors may have suffered a bit on the other metrics, but achieved 100 percent incremental sales on their new items. They didn’t cannibalize or dilute their other products.

The final piece is where we arrive at the total Innovation Index. Manufacturer size, Quantity, Quality and Uniqueness are all assigned a number of points (from 0 to 5) based on their metrics. These four scores are then multiplied, and divided by 6.25 in order to re-scale the totals to a possible 100.

Taking Unilever as an example, we get the following equation:

Unilever delivered innovation that far outperformed the competition. While this analysis has considerable value, it becomes much more valuable as we track performance over time. Are there certain brands or manufacturers that regularly deliver positive innovation to the category and others that do not? As we’ve demonstrated, innovation is now measurable, using the same data that you’ve been buying historically.

So now we’ve covered distribution-based analytics as well as innovation, but there’s a third set of new metrics that can be invaluable and that are obtainable by using the same syndicated data.

The problem with the current set of promotion-based metrics is the sheer volume of them, most of which manufacturers simply don’t need. The typical custom database from IRI or Nielsen has over 100 of them, with the industry norm being a focus on the measures report the quantity of promotions (e.g. what percent ACV had a Feature?) and not on the quality of the promotion (how many more units did I sell?). Gaining insights on your promotions, particularly if you are measuring profitability and Return on Trade Investment, depends primarily on understanding the quality of promotion. Both quantity and quality are important elements to measure when analyzing trade promotion activity.

To make things simple we want to boil these concepts down to one measure for each element. Let’s start with quantity first.

The metric called Average Events helps us learn how much we’re promoting a group of products. It accounts for the coverage of the geography being analyzed (i.e. is the promotion available in all stores?) and, importantly, the coverage of the brand (or product group) being promoted. There is a big difference in execution between promoting a small portion of a brand and promoting the entire brand.

In calculating Average Events we take the UPC Promo Points, which is the sum of the promo ACV points for all the UPCs in the group, and then divide it by the Total Distribution Points:

If, for example we looked at 13 weeks, and the average event score was 3.0, we know that this brand received the equivalent of three weeks’ worth of brand-wide, geography-wide promotional support during that period.

Now that we have the quantity piece of the puzzle, let’s look at the quality, which virtually no one in the industry examines. The first metric in helping us determine promotional quality is called Revenue. It answers the question, “What’s the shipment value of the incremental retail sales generated from our promotion?” This “Revenue” is being used in a different context than the usual revenue figure that measures just shipments. This Revenue is telling us what sold through not what sold into retailers.

The next step is to calculate Incremental Revenue which is the extra Revenue being generated from promotions. If you normally sold 200 units in a week, your normal (or baseline) Revenue is $700.00. When we subtract that from the $2100 of Total Revenue we have $1,400 in Incremental Revenue. That is the measure compared to the Incremental Cost of a promotion to determine profitability.

The measure of quality is the Incremental Lift per Event. Lift is defined as the ratio of Total Units to Baseline Units. By definition, Baseline Units account for 1.0 of those weeks. The incremental component then tells you how much more was sold per event as a factor of Baseline Units.

Notice how Average Events (the measure of quantity) appears in the quality measure, Incremental Lift per Event. Creating the Average Events measure is not something easily extracted from the data since there are so many items and causal measure that must be processed. Deriving this measure requires an automated solution, such as TABS Insight Pro®.

Finally, we want to determine the Incremental Factor, which is defined as the number of incremental units divided by the total units. This is one of the most strategically important measures in understanding your business. It is the metric that lets you determine how much of your business goes away if you cease promotional activity. In other words, how reliant is your business on incremental promotional sales, and how does that compare to the competition?

To see how these metrics can help guide promotional decisions, let us turn again to TABS Insight Pro® and its Sales Drivers tab. 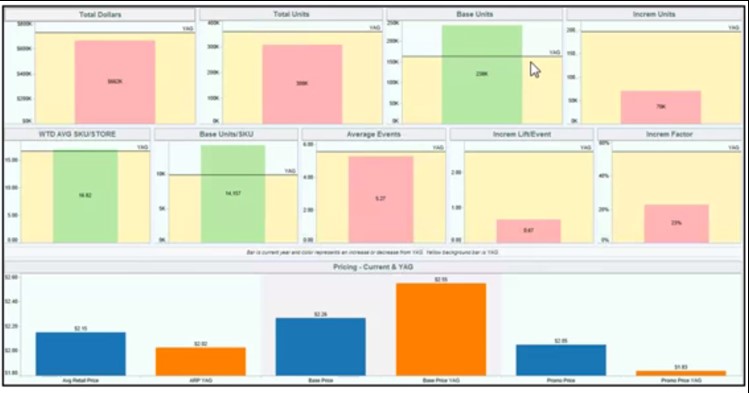 It is apparent that the dollar and unit sales are both down, but base sales are significantly up. How can that be? Take a look at the incremental units. Incremental sales have dropped off by more than half compared with the same period from a year ago.

But why did they drop so precipitously? Seeking out the answer to this question is where the real insight begins. Fortunately, we can find the answer at a glance. Take a look at the second row of graphs.

The distribution remained constant as we can see from the Wtd Avg SKU/Store measure. We did have some higher velocity on our everyday Base business (Base Units/SKU), and that is why our Base Sales are up – higher velocity when not on promotion. The main items that explain the decline in retail sales are the quantity (Average Events) and quality (Incremental Lift per Event). In terms of quantity there was only a slight drop, so we did roughly the same amount of promoting compared with a year ago. But the incremental lift per event dropped by two-thirds. So we have now identified the source of our decline.

In looking at the Incremental Factor, we can see that a smaller (but still substantial) part of our business would go away if we stopped promoting. Last year we were quite dependent on promotion to support our sales, and this year we can see that dependence after we moved to weaker promotions.

We’ve had a look at syndicated data and how best to extract distribution-based metrics. We've also looked into insights for innovation and promotion that can allow you to understand your business more thoroughly. In our next few posts, we’ll cover how you can leverage panel data and surveys to give you a complete picture of what is driving your business. 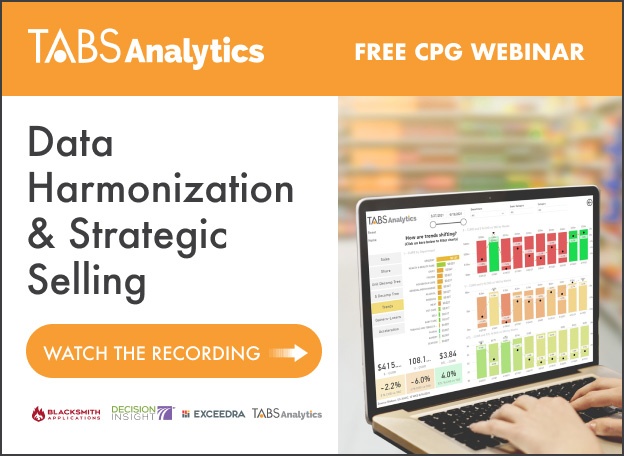